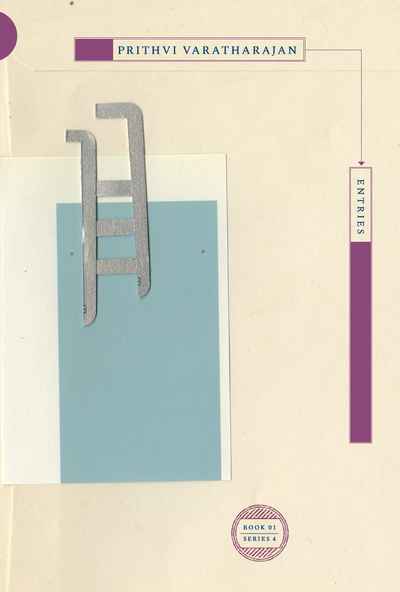 *Longlisted for the ABDA Awards 2021*

For Varatharajan, all communication is an art defined by authenticity rather than decadence. These poems do not drink and dial, hey do not hit 'send' too soon. In this manner they are a balm to current hyperactive expectations of social responsiveness. Paradoxically, Varatharajan does this by emphasising the provisionality of our being social animals. Entries not only registers so many types of everyday (but by no means banal) oscillation, it seems to revel in them. He openly invites us to celebrate this slow suspension as the most honest position: 'I am king of ambivalence, so I'm king of being human.'

'The writing that follows arose from states of joy, anguish, ambivalence and contemplation. The poems come from a period of ten years, while other poetic, essayistic and diaristic pieces were produced with intensity over a shorter duration.

Not long ago we humans began to share typed and contained expressions — whimsical, crass, artful, profound, wounded — instantly and with a large audience, through an expanding web of fibre optics. The poems straddle the rise of networked and relatively indiscriminate platforms for communication: some were produced before their rise, and fed by silence, while others were produced after, and fed by the ghost crackle of digitised speech.

The prose poems and prose all come from after, but from a period within the after when I'd left the main conduits. At the outset of my asceticism, I found I had a compulsion to communicate to a wide audience. I sought to satisfy this compulsion, which I'd never felt so strongly, and began sending letters to myself by email, with a changing group of people as BCC recipients. As I wrote I felt I was consciously or unconsciously blending an older, poetic address — Eliot's 'I' talking to itself or to nobody in particular – with recent communicative impulses. This seemed to create new possibilities for what the poem could be, and what it could enter into, as a form of mediated performance.' — Prithvi Varatharajan