Family Don't End with Blood: Cast and Fans on How Supernatural Has Changed Lives Edited by Lynn S. Zubernis 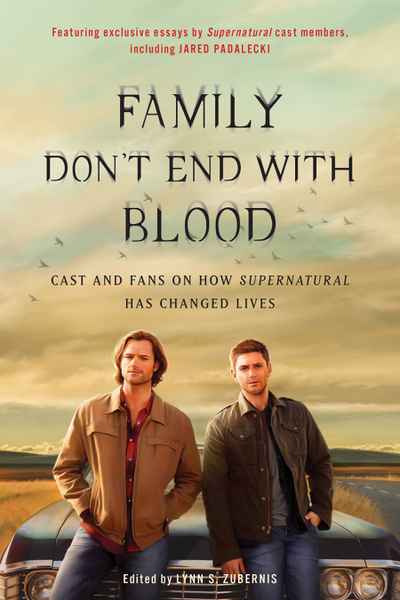 Family Don't End with Blood: Cast and Fans on How Supernatural Has Changed Lives
Edited by Lynn S. Zubernis

How a Show, and the Support of Its Fandom, Changed—and Saved—Lives
May 2017 marks the end of the twelfth season of the CW hit Supernatural, a television show about two demon-hunting brothers (and an angel) that is at the center of a fan community as tight-knit as family—a virtual support system that spans the globe. The three-time People's Choice Award winner for Favorite Sci-Fi/Fantasy TV Show and Tumblr's 2015 Most Reblogged "Live Action TV" show has made a name for itself by supporting and encouraging its fans to "always keep fighting," a main theme echoed in the show, and demonstrating the inspiring truth to a memorable line from early in the show's run: "Family don't end with blood."
In twenty powerful chapters written by Supernatural's actors and fans, including series lead Jared Padalecki, Family Don't End with Blood: How Supernatural Has Changed Lives examines the far reach of the show's impact over the last eleven years. Supernatural has encouraged fans to change their lives, from getting "sober for Sam" to escaping a cult to pursuing lifelong dreams. But fans aren't the only ones who have been changed. The actors who bring the show to life have also found, in the show and its community, inspiration, courage, and the strength to keep going when life seemed too hard.
In keeping with the show's message to "always keep fighting," and to support the important work of combatting stigma and encouraging those who are struggling to speak out, a portion of the proceeds from the book will be donated to charity Attitudes in Reverse, whose mission is to educate young people about mental health and suicide prevention.
Contributors from Supernatural's cast include:
Jared Padelecki ("Sam Winchester")
Jim Beaver ("Bobby Singer")
Ruth Connell ("Rowena MacLeod")
Osric Chau ("Kevin Tran")
Rob Benedict ("Chuck Shurley aka God")
Kim Rhodes ("Sheriff Jody Mills")
Briana Buckmaster ("Sheriff Donna Hanscum")
Matt Cohen ("Young John Winchester")
Gil McKinney ("Henry Winchester")
Rachel Miner ("Meg Masters")
Edited by Lynn S. Zubernis, a clinical psychologist, professor, and passionate Supernatural fangirl, Family Don't End with Blood provides an insightful and often uplifting look into the way international fan communities become powerful, positive forces in the lives of so many.