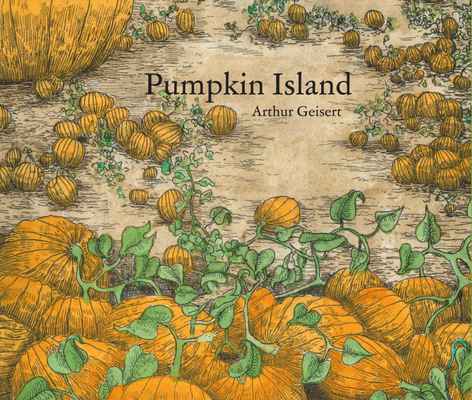 Drawn from life, Arthur Geisert's Pumpkin Island is the fantastical story of a real life town brought to a halt by a profusion of pumpkins.

Elkader, Iowa, is the perfect picture of small town life — that is, until the pumpkins arrive. One pumpkin? Fine. Two pumpkins? Okay. But with pumpkins growing around every street corner, and over every building, what's a town to do? In these pages, Geisert imagines the town of Elkader overrun by the pumpkins that grow on Pumpkin Island, which sits in the Turkey River, right outside his kitchen window.

'In an enigmatic seasonal story with threads of the magical, a rising river washes away a pumpkin, whose seeds sprout on a small island. As the vines grow, the pumpkins become ubiquitous in the streets of Elkader, Iowa. After many pumpkin desserts, townsfolk convert the gourds into boats and houses. Just as the pumpkins 'became such a problem that people started carting them away to the abandoned stone quarry,' Halloween arrives. In a dramatic spread, night has fallen over the town, and the faces of the many jack-o'-lantern faces glow hauntingly. While the pumpkins may be gone for the season, Geisert suggests with a final flowering tendril, vines rarely keep to themselves.' — Publishers Weekly