Platform Papers 39: The Retreat of Our National Drama Julian Meyrick 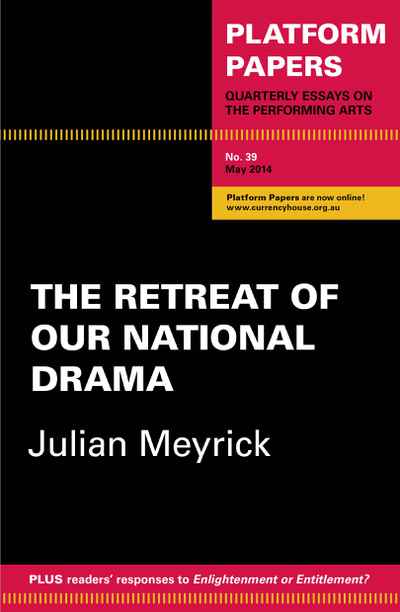 Platform Papers 39: The Retreat of Our National Drama
Julian Meyrick

A rising controversy has arisen regarding the repertoire of our national stages: a debate around a mainstage vogue for resetting familiar international classics in an Australian context and the playwrights who believe their work is being depreciated. Julian Meyrick believes the cause goes much deeper than the present quarrels. The adaptations issue, he writes, is a symbol of loss within the Australian dramatic consciousness. It is not about defending Tennessee Williams over David Williamson; but about the value of our national drama. Audiences no longer understand the difference between making a new play and buying an old one. Something crucial has been lost, about our ability and need to nurture and produce original drama; and public policy has been a contributor. To remedy this, he concludes, we need a national theatre. Not a building or a company but a co-commissioning, co-production house that will address, seriously, the growth of our own classic repertoire.