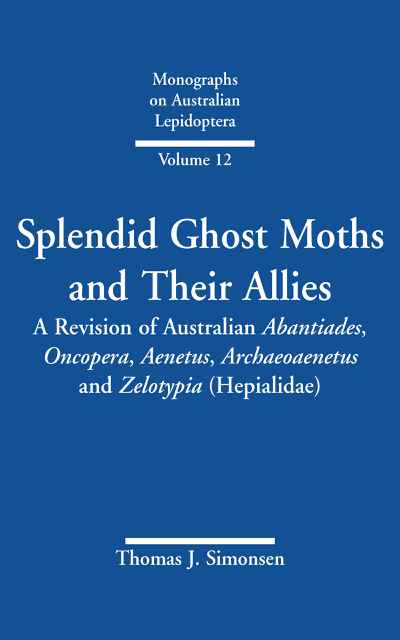 The Hepialidae (Ghost Moths) are a family of often spectacular micro-moths. The Australian region is one of the hot spots for hepialid diversity and the fauna is divided into three groups: primitive Hepialidae with small, often overlooked species; oxycanine Hepialidae, containing the large and poorly known genus Oxycanus and its allies; and finally the hepialine Hepialidae, which span from stunning, green Splendid Ghost Moths in the genus Aenetus, to the enormous moths in the genera Zelotypia and Abantiades (which include some of the most impressive insects in the world), to smaller, drab pest species in the genus Oncopera.

Splendid Ghost Moths and Their Allies is the first work to provide comprehensive information about the taxonomy, biology, diversity and morphology of all 70 Australian hepialine Hepialidae species, including the descriptions of 15 species and one genus new to science. Each species is illustrated with colour photographs of males and females and drawings of the genitalia, and the book also contains identification keys to genera and species. Distribution maps and detailed information on where each species is found are included, as well as a species richness map for the group in Australia. This book is an invaluable reference for moth enthusiasts, professional entomologists and nature conservationists alike.