Breaking Bad: I Am the Danger edited by Running Press 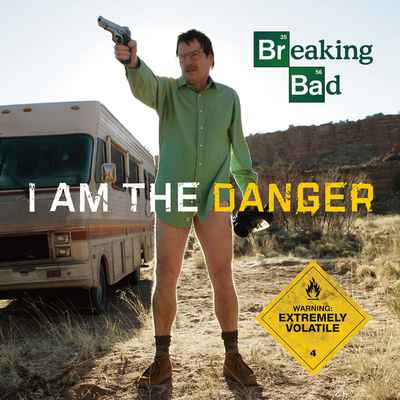 Breaking Bad: I Am the Danger
edited by Running Press

When Walter White, a struggling high school chemistry teacher, is diagnosed with inoperable lung cancer he turns to a life of crime producing and selling methamphetamine with a former student, Jesse Pinkman, in the hopes of securing his family’s financial future before he dies. He will stop at nothing to make sure his family is taken care of after he’s gone—even if it means putting all their lives on the line. This officially-licensed companion to the hit series features the most volatile and exciting moments from episodes from all five seasons. With full-color photographs and memorable quotes from Walt, Jesse, Skylar, Hank, Gus, Mike, Saul, Tuco, and the rest of the unforgettable cast, Breaking Bad: I Am the Danger  follows the evolution of Walter White from high school chemistry teacher and mild-mannered family man to Heisenberg, Albuquerque’s most dangerous kingpin of the drug trade.