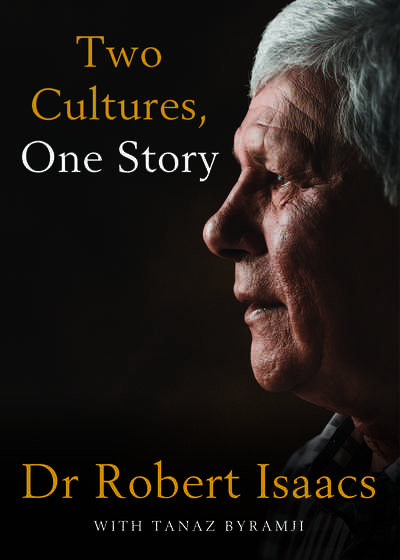 'I stood at the school gates with nothing but the clothes on my back. I had no money, no family, no home — nothing to show for the past 16 years except my cheap cardboard suitcase and a reasonable grasp of reading, writing and arithmetic … I didn't know what I was going to do next, but I knew that whatever it would be, it would be on my own terms.' — Prologue, Two Cultures, One Story

Dr Robert Francis Isaacs AM, OAM, PhD (Hon) has spent his life bridging the divide between white and black Australia. Taken from his mother as a baby, Robert was raised in institutions not knowing he had a family and not knowing he was Aboriginal.

Enduring severe hardship, discipline and abuse at the hands of the Christian Brothers, Robert went out into the world at the age of 16 determined to make a life for himself and a family of his own.

A chance encounter with a member of his extended family would help shape the rest of his life. Determined to both embrace his culture and build on his faith and education, Robert immersed himself in the world of Aboriginal health and housing, proving to be a straight-talking, deft political negotiator who can achieve real outcomes for Aboriginal people. Over the decades, Robert brings his considerable interpersonal skills to bear in the areas of alcohol and drug abuse, employment, relations with the police, the justice system and education.

Told with grace and strength, this memoir shares the inside story of a respected Elder and his drive to break down cultural barriers and improve the lives of his people.