In The National Interest 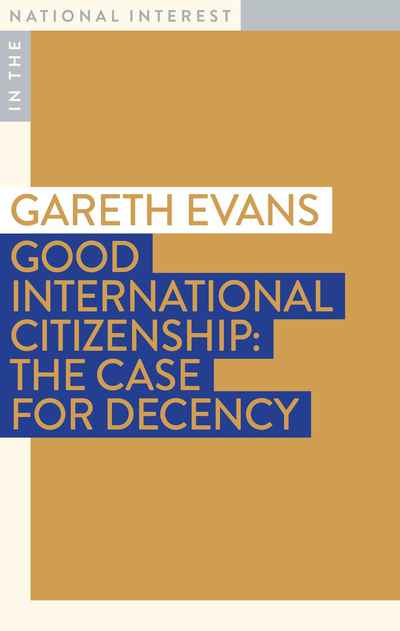 Why should we in Australia, or any country, care about poverty, human rights atrocities, health epidemics, environmental catastrophes, weapons proliferation or any other problems afflicting faraway countries, when they don’t, as is often the case, have any direct or immediate impact on our own safety or prosperity? Gareth Evans’ answer is the approach he adopted when Australia’s foreign minister. He argues that to be, and be seen to be, a good international citizen — a state that cares about other people’s suffering, and does everything reasonably possible to alleviate it — is both a moral imperative and a matter of hard-headed national interest. The case for decency in conducting our international relations is based both on the reality of our common humanity, and a national interest just as compelling as the traditional duo of security and prosperity.

Four key benchmarks matter most in assessing any country’s record as a good international citizen: its foreign aid generosity; its response to human rights violations; its reaction to conflict, mass atrocities, and the refugee flows that are so often their aftermath; and its contribution to addressing the global existential threats posed by climate change, pandemics and nuclear war. Measured against them, Australia’s overall record has been patchy at best, lamentable at worst, and is presently embarrassingly poor. The better news is that, on all available evidence, the problem lies not with the negative attitudes of our people, but our governments. Those in office might prefer Berthold Brecht’s solution: ‘dissolve the people and elect another.’ But the right course for the rest of us is to persuade our political leaders, on both moral and national interest grounds, to change their ways, and to vote them out if they don’t.