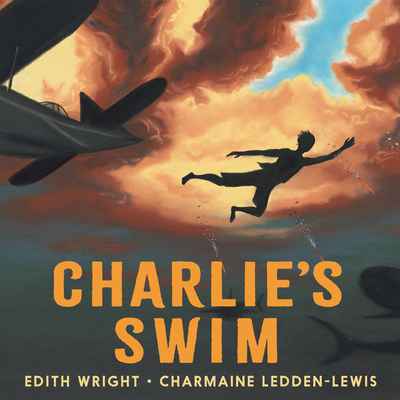 During WWII after the Japanese invasion of Java, more than 1000 refugees from the Dutch East Indies, many in flying boats, passed through Broome, which was a major refuelling point and a significant Allied military base. On 3 March 1942 Broome was attacked by Japanese fighter planes, killing at least 88 civilians and Allied military personnel.

Charlie’s Swim is based on the true story of the author’s Uncle Charlie (Charles D’Antoine) who was working inside a flying boat when the attack began. In the midst of flying bullets, blazing fires and sharks, Charlie saw a woman and child desperately trying to keep afloat and without hesitation went to their rescue.

In 1944, Charlie was awarded a Certificate of Merit from the Royal Humane Society of Australasia in recognition of his efforts and he was awarded four medals for bravery from the Dutch government. It took a further 80 years for the Australian government and military to formally recognise this bravery.

'One morning Charlie was working inside a seaplane. He suddenly heard planes flying overhead, and they seemed incredibly low. Charlie went outside. When he looked up he saw enemy planes swooping towards the bay.’